In the half century after the 1965 Immigration Act, the United States underwent a profound demographic shift, with newcomers arriving from around the world in numbers not seen since the early years of the twentieth century.

When the law was passed, fewer than five percent of Americans were foreign born.  Fifty years later, immigrants made up nearly 14 percent of the U.S. population, and the composition of the foreign born population had changed dramatically. The 1965 Act abolished the national origin quotas that favored immigrants from Europe and discriminated against all others. The United States for the first time became a country that officially welcomed people of all nationalities.

Over the next decades, America’s founding myth of openness was put to the test. Prior to the 1965, three out of four immigrants came from Europe, and the country’s cultural character reflected its Anglo Saxon roots. Since then, nine of ten have come from other parts of the world. One of the last—and most important– acts of the civil-rights era, the 1965 immigration Act forced a new consideration of the U.S. national identity. By committing to a multicultural heritage, America took a thrilling gamble, betting heavily on its own resilience.

“The 21st century will be defined by seismic global immigration, remapping human interaction to the core, and the United States will remain the model for other nations to emulate. Tom Gjelten understands why, not only because he is a byproduct of immigration, but because he has been in the trenches—the inner cities, the rural landscapes, the contested borders‑‑where America is reborn on a daily basis. In this probing exploration, he explains, lucidly and with compassion, the extent to which the motto e pluribus unum is the engine of progress.”
— Ilan Stavans, editor of Becoming Americans: Immigrants Tell Their Stories from Jamestown to Today

“Tom Gjelten sings of a new America that bravely invites newcomers. A Nation of Nations would have pleased Whitman himself for its generosity, spirit and hope. This book is both smart and moving.”
— Min Jin Lee, author of Free Food for Millionaires

Books, Nation of Nations for Readers 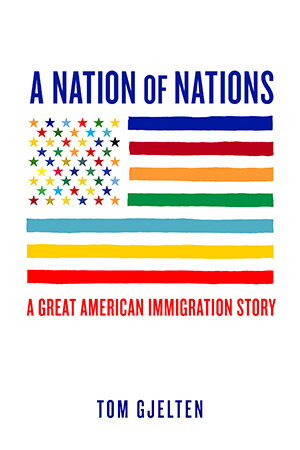